This is it people.

The top of the mountain. The end of the road. The holy grail!

This is our stuffed crust BBQ jackfruit pizza.

The perfect pizza base, melty vegan cheese and delicious toppings.

We use the ‘original flavour’ Violife cheese for this recipe.

We tested various brands and this cheese melted the best in the crust.

The trick, which we realised after several attempts, is to stretch the dough as you roll the cheese into the crust.

This creates more surface area for the toppings, but it also ‘thins out’ the crust so it doesn’t balloon in the oven.

BBQ and jackfruit is a match made in heaven.

The jackfruit gives this pizza a seriously ‘meaty’ texture and the BBQ brings a wonderfully tangy flavour.

A few things to know:

It has finally arrived. Please give a very warm welcome to our STUFFED CRUST BBQ Jackfruit Pizza 🔥 We’re planting a…

Ben, So Vegan It has arrived. This is it people. The top of the mountain. The end of the road. The holy grail! This is… Print This
Serves: 2 large pizzas Prep Time: 40 minutes, plus proving Cooking Time: 25 minutes
Nutrition facts: 200 calories 20 grams fat 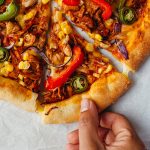 Amazing!! What cheese do you use?

This looks so good! I never tried a stuffed crust before, because it’s never vegan. Great idea to just make it at home!