There’s a lot to love about this sweet potato burrito. It’s sweet, spicy and it’ll probably fill you up for the entire day! But the best thing about our recipe is the fact it’s super easy.

One of the most frustrating things about making a traditional burrito is you’re left with half a dozen or so pots and pans to clean up! So we decided to come up with our ‘lazy’ version.

Most of the ingredients are baked in one tray so it’s no fuss and really easy-to-follow and there’s still tons of flavour packed into the burrito.

If you’re looking for a recipe for cashew sour cream, we have you covered over on our famous Taco Ring recipe here. 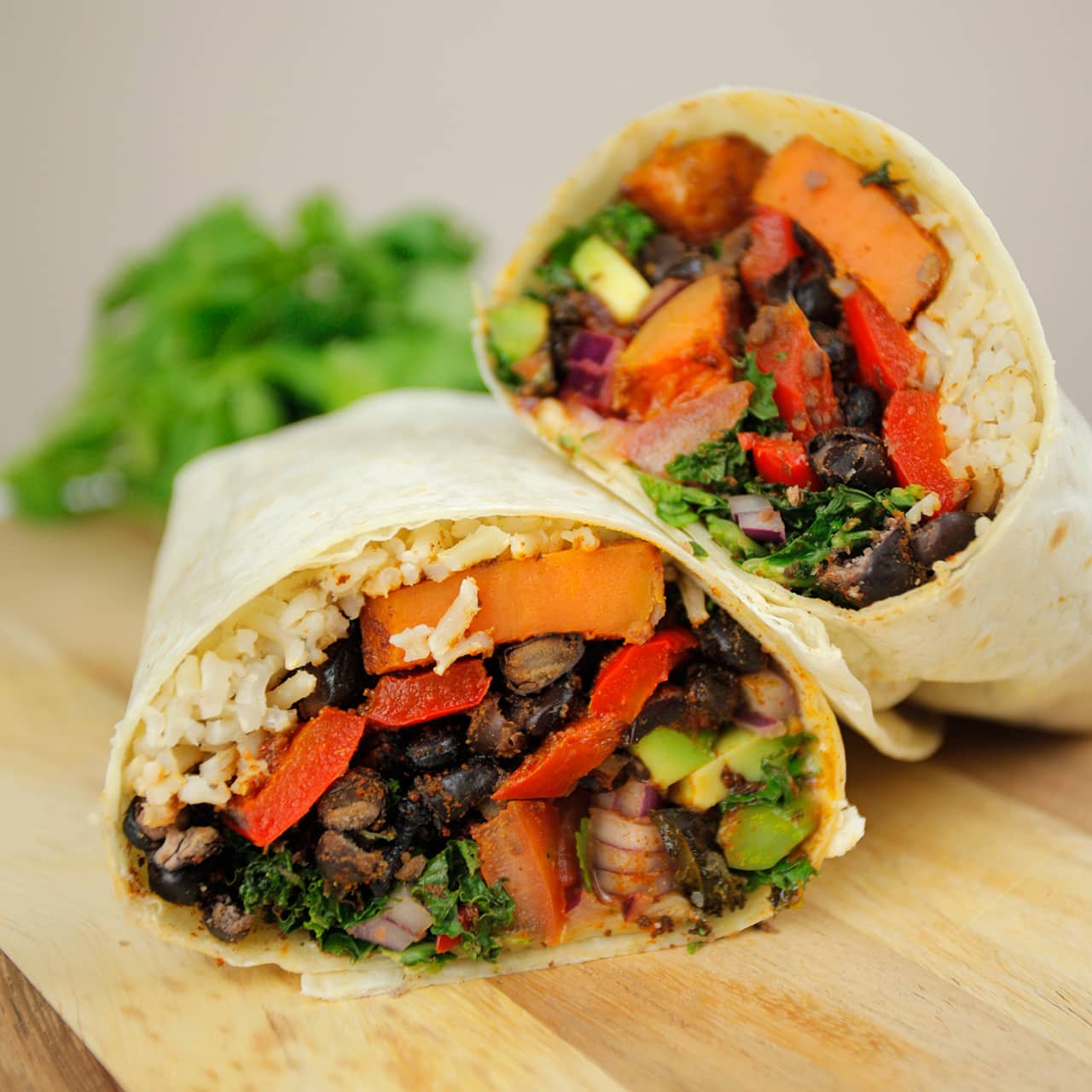 Wow. This looks great. Do you deliver? ;). Thank you for sharing your wonderful recipe.

The sweet potatoes needed to cook about half an hour longer than the beans and peppers. But, it was delicious!

Thanks Crystal! If we cut the sweet potato into small enough chunks then it will take the same amount of time to cook as the other ingredients. Our sweet potato was lovely and soft, hope that helps.

do you make the cashew sour cream or can it be purchased? would need recipe please. thank you.

Hey Judi. You can easily make the cashew sour cream yourself. Here’s the recipe we use:

Method:
1. Soak cashews in hot water for 10 minutes, then drain.
2. Combine all ingredients in a blender until smooth.

Thanks! Roxy (So Vegan)

I made this today and mimicked the approximate size of the sweet potatoes in the video. They took much longer than 15 minutes to cook, even at 400°F. I ended up having to remove the red peppers and beans to avoid them overcooking. Overall, the flavor was really good and we loved them. We’ll definitely be making them again!

OMG – so goooood! I made it with pumpkin instead of sweet potato and without avocado (allergic). It was love. My taste buds were in heaven.
This is definitely my new favourite website!!!!

Our debut cookbook So Vegan in 5 is out now! It's packed with over 100 super simple 5-ingredient recipes, making it easier than ever before to eat more plants. Grab your copy today via Amazon.

Hello! We're Roxy & Ben. We created So Vegan in 2016 to make it easy for people to eat more delicious plants so people and the planet can thrive, and since them our videos have been seen by hundreds of millions of people all over the world. It's amazing to see so many people enjoying our plant-based creations, and this is only the beginning!

Oh yeah we did. Our Butternut Squash Wellington! If you're looking for a festive Christmas dinner centrepiece, then… https://t.co/pstAljqpEB

Reply Retweet Favourite
New video: We decided to taste test the most EPIC vegan 🧀 cheese 🧀 in the world. And we survived! Here are the resu… https://t.co/yyGCvENflf

Reply Retweet Favourite
We have some seriously tasty news peeps. Our debut cookbook So Vegan In 5 is now officially global! Not only is it… https://t.co/0ThtNPVUY0

Reply Retweet Favourite
Ready to take your potato game to the next level? Give our epic Vietnamese-Inspired Fries a go! 🍟… https://t.co/BHLFGbsUQj

Reply Retweet Favourite
Walnut Meat Tacos. Quick, delicious and nutritious! Here's our latest video on YouTube if you want to find out how… https://t.co/qDIfiaE3bo