2020 has been hard enough so it’s about time we started making things easier for ourselves.

We start with a soft spiced chocolate coffee sponge (seriously!) and top it with a smooth vegan buttercream.

And what’s more, we’ve joined forces with Fairtrade for this recipe.

We use the delicious Percol Fairtrade Coffee, which is a smooth Columbian roast with berry and citrus notes.

You can find out more about our friends at Fairtrade below.

Here’s what you need to know about the recipe:

We’re super stoked to be teaming up with Fairtrade for this epic cake.

As you can imagine we’re big believers in supporting fair trade businesses, which also means supporting fair pay, protection of people and planet, gender equality and so much more.

It’s a mission close to our hearts so we were over the moon when they asked us to create a recipe using the delicious Percol Fairtrade Coffee.

Don’t forget you can get so many Fairtrade ingredients nowadays.

You can find out tons more Fairtrade at fairtrade.org.uk.

Honestly, this cake is ridiculously delicious.

The cinnamon and nutmeg really compliment the bittersweet flavour from the cocoa and coffee.

And let’s not forget the most epic buttercream we’ve ever created.

We’re talking about a coffee and vanilla-infused creamy buttercream. Let that sink in for a second! 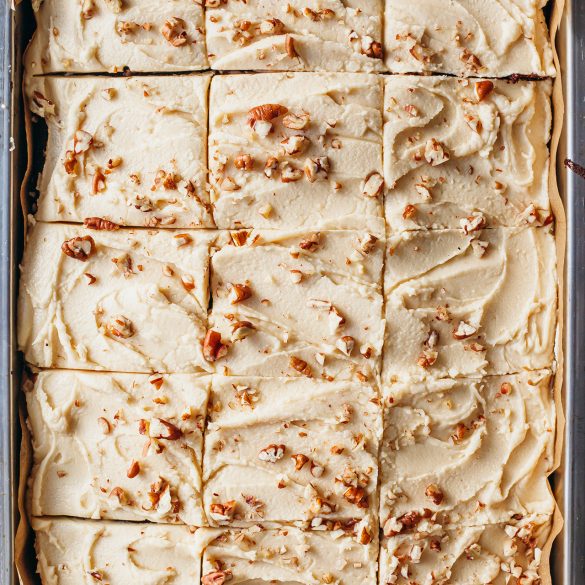 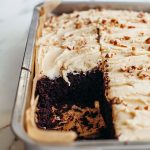 For the coffee buttercream:

How To Make Vegan Butter

My mouth is watering! Do you have a gluten free alternative?

Hi there, just wanted to leave some feedback as I made this recipe and found it tasted great but was very crumbly. Im not a pro at vegan baking but i felt like it lacked something to bind the ingredients.

Hey Gina. Oh sorry to hear that. It sounds like your cake mix was too dry. It doesn’t need anything else to bind the ingredients. Did you follow the method exactly? The cake mix should be the same as what it looks like in the video – thick but still runny so it pours easily into the tray. Then it’ll come out lovely and fluffy.

I followed the recipe exactly and had the same issue with it being too crumbly. Still tasted good though!

Thanks Miles! Really glad you enjoyed the recipe. Lots of ovens can vary in terms of temperature so it’s best to use the toothpick method as mentioned in the method. Thanks! Ben

In the midst of making right now! Can you tell me what size cake pan I should use?

how many calories are in a serving?