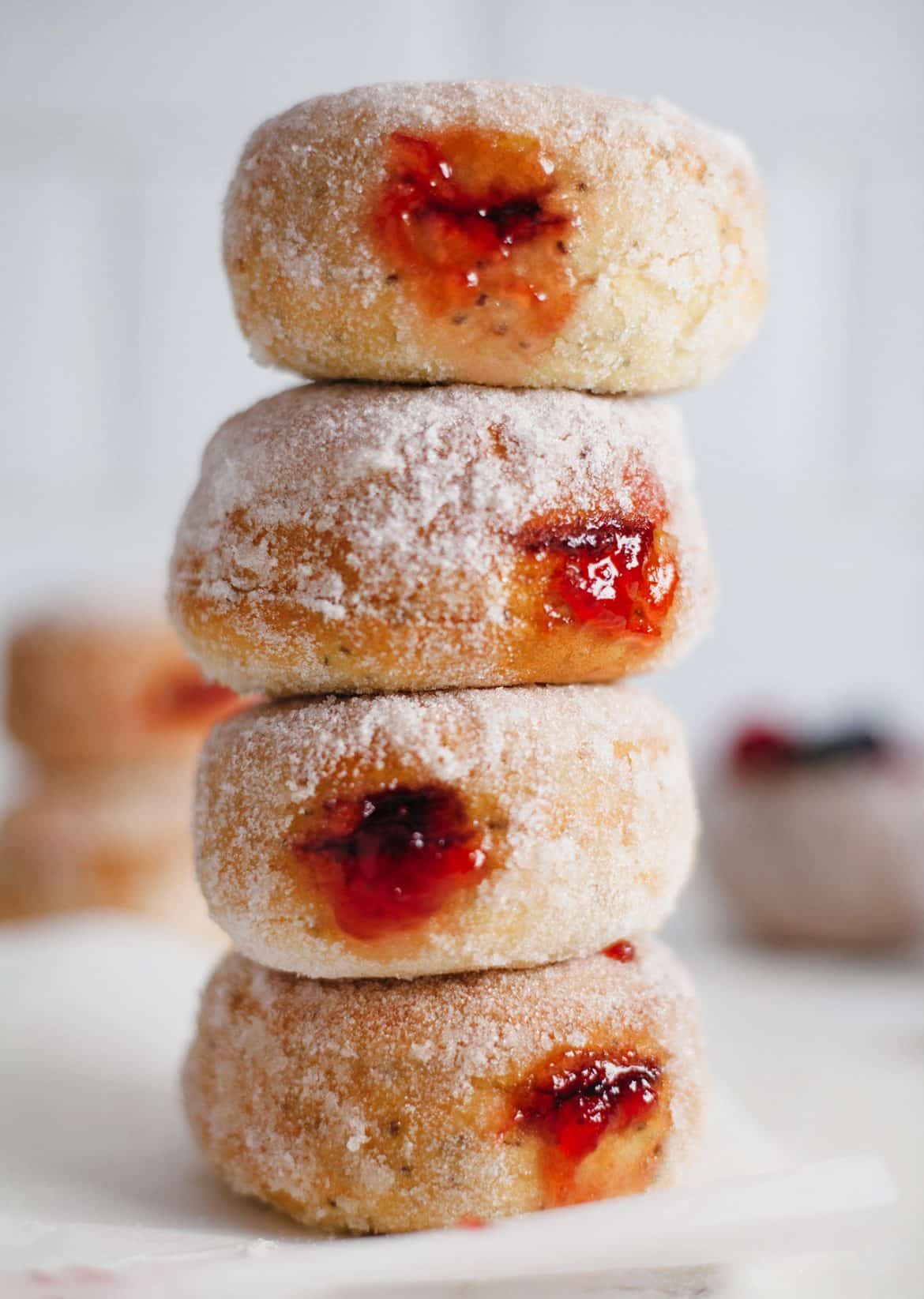 Looking for tasty vegan recipes? Check out our cookbook So Vegan In 5: sovegan.co/cookbook 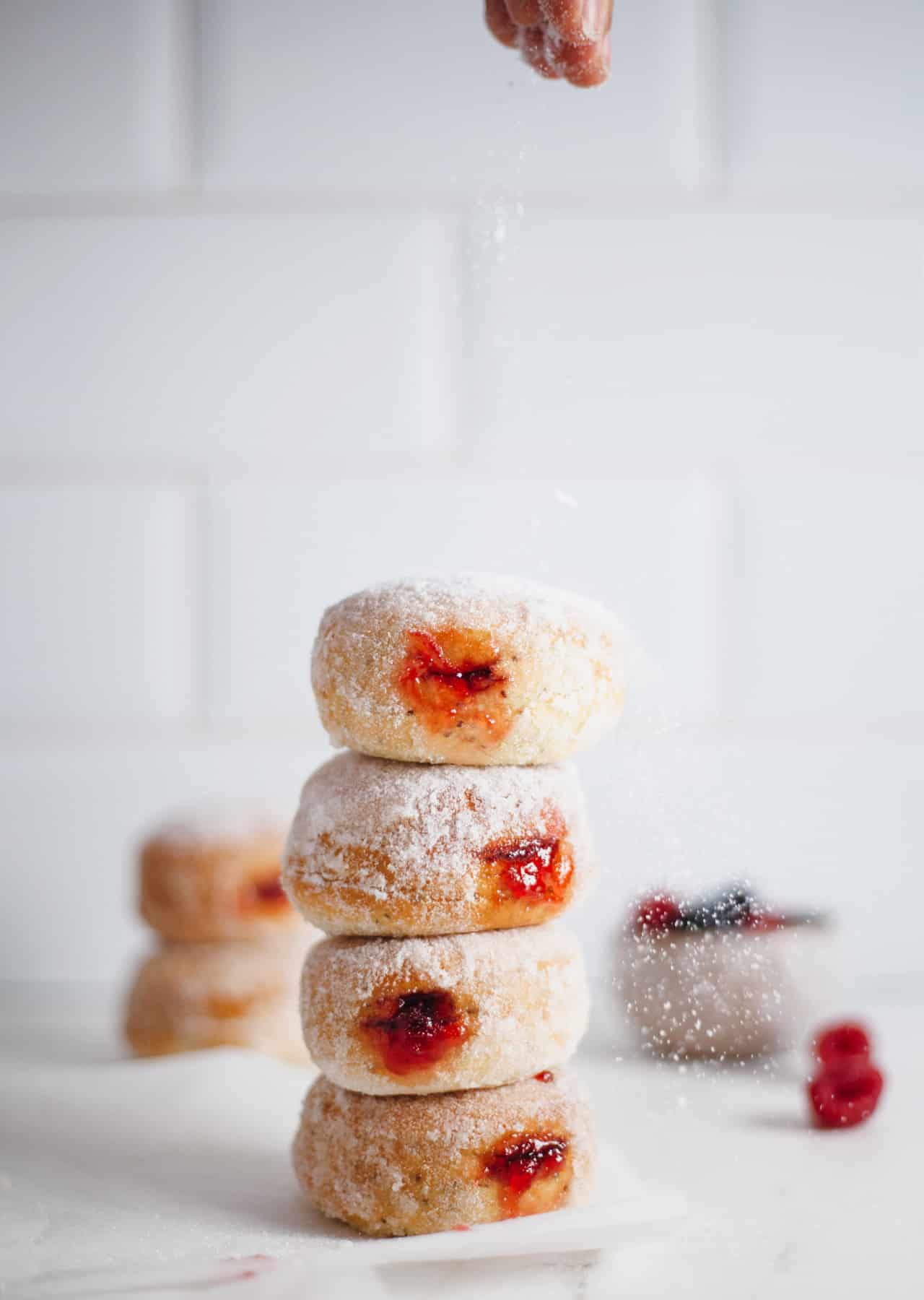 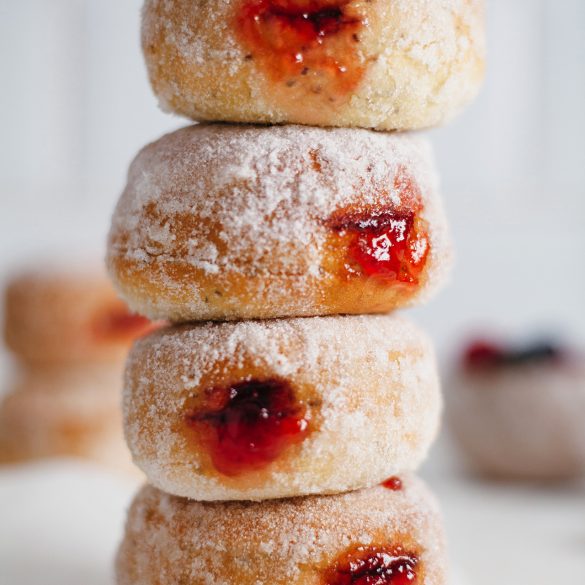 Is there another vegan alternative I can replace the chia egg with ?

Followed the recipe – didn’t look a think like the pictures. More of a scone.

Hi Mike, ah that’s a shame, hope they tasted good! We find that when we cut the doughnuts out with the stencil they look better if we minimise handled as much as possible. Hope this helps 🙂 Roxy

My doughnuts just came out of the oven. Incredibly fluffy and delicious! Didn’t have any vegan butter on hand, so I added oil instead which worked perfectly.

Amazing! So chuffed they came out great 🙂 Roxy

Wow, wow, and wow! Those are totally awesome! The turned out superb, and i hope my guests will love them as well later this evening!

Looks delicious. What can I use instead of yeast?

You can’t really substitute yeast in this recipe, unless you created a cake dough using baking powder – but then that would be a completely different recipe!

Do these work w gf flour?

We haven’t tested and we don’t often use GF flour so wouldn’t really be able to confirm. But usually a blend of GF flours work best.

I followed the recipe to a T but unfortunately, they came out looking more like a scone. I used Miyoko’s vegan butter. I will definitely try again with a different vegan spread.

Hey Diana. Sorry to hear that. Lots of people have recreated this with success so maybe it’s your vegan spread like you suggest. Or maybe your yeast wasn’t active? Did the dough double in size after proving?

Just did them for Christmas day and they were PERFECT! Such a treat!
Thank you guys for this recipe, it’s so delicious…
If you follow the steps right they come out exactly as in the picture.
Suuuuuper good

Oh god… I’ve just realized I didn’t use the right yeast. I’m French and I have put what we are used to calling fast action yeast here, but what is in fact baking powder in English… in French the right type of yeast is called baking yeast (which is why I made the mistake)

Gotta do it all again soon

Ahh, we didn’t know this! Yes, it’s basically dried yeast. Good luck with the next go!

My donuts taste like breads. Did i wrong somewhere?

Just made these right now. Super delicious. I made my own raspberry chia seed jam and blended some freeze dried strawberries with sugar for the topping. My 3yr old is obsessed with pink and loved the pink sparkly finish.

Followed recipe to a T and donuts never turned brown and remained white as when proving. Any thoughts on what went wrong? Thx!

Was super excited to try this recipe – especially as this would have been my first chia egg. I had all the right ingredients, followed the recipe step by step, but they didn’t turn out at all as pictured. Mine are flat, doughy, and exceedingly chewy in a not so good way.

Hey SB. It sounds like your dough didn’t prove well? Did it double in size? If not, perhaps the yeast wasn’t active.

Hi there. Can I substitute aquafaba instead of the chia seeds as egg replacement? I’m keen to try them soon! Thanks for your amazing recipes, I’ve just received your book.

When you cut out your donuts, do you then re-shape the excess dough to cut out more? Or throw the extra away? Sorry, dumb question! lol. I’m not much of a bread maker. Didn’t end up with 12 donuts and I didn’t want them to be over-worked so I just threw the excess away.

The SO VEGAN App

Download our app today and start your 7-day free trial to discover over 350 fuss-free and flavoursome recipes! Find out more

Reply Retweet Favourite
The SO VEGAN App has arrived! It's finally here - after years in the making - and we really hope you enjoy it. Find… https://t.co/8Ftx1f1KEL