Can you believe we turned vegan nearly two years ago? How time flies!

It’s also been nearly two years since we had garlic bread. Well…until now! Sure, these garlic bread swirls aren’t the healthiest of snacks, but they’re so satisfying.

This really is the ultimate garlic bread. Mushrooms give this recipe a new dimension and flavour twist that takes it to the next level.

We really hope you enjoy this recipe as much as we do. Don’t forget to send us pics of your recipe creations on Instagram or Facebook and we’ll be sure to feature them. 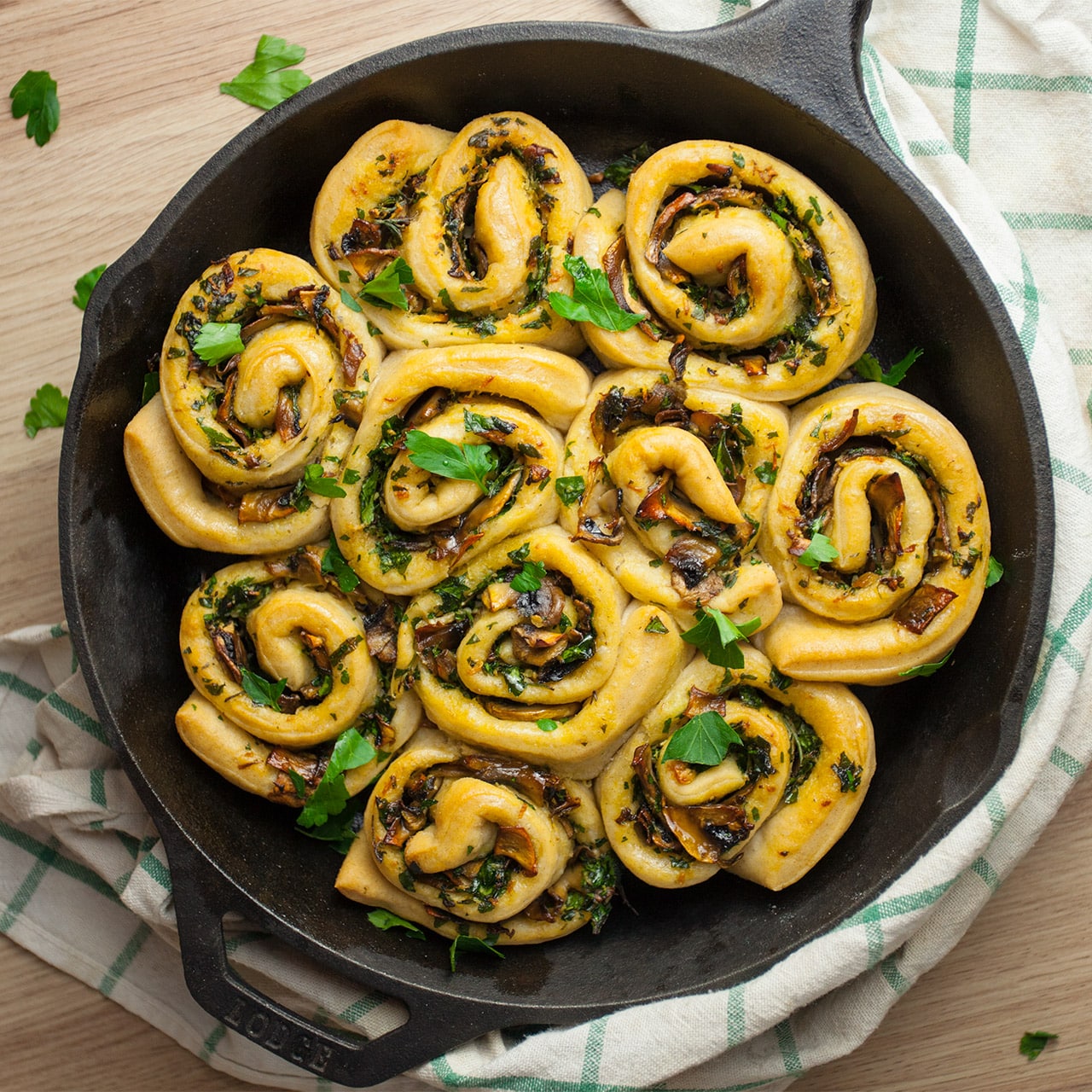 2 comments –
1: these look amazing and my tummy grumbled just watching the video
2: it should be ‘proof’ not ‘prove’.

Thanks Doren! Here in the UK we say “prove” (you’re not the first person to question it!).

Please convert ingredients to cups & ounces for me

Or Google it, lol

Thank you for the recipe, I’ve prepared these swirls several times already, and they’re a success each time.
A have a small question, in the ingredients list everything is in grams, except the margarine, is there a reason for that?

Hi Anne, super chuffed to hear you’ve made this recipe several times 🙂 No real reason the margarine is in cups. Good spot! 1/2 cup margarine should be around 115 grams. Hope this helps. Best, Roxy

Hey
Can I use regular flour?

Our debut cookbook So Vegan in 5 is out now! It's packed with over 100 super simple 5-ingredient recipes, making it easier than ever before to eat more plants. Grab your copy today via Amazon.

Hello! We're Roxy & Ben aka So Vegan. We created So Vegan in 2016 to help bring vegan food to the masses and since then our recipes have been viewed by tens of millions of people all over the world. It's amazing to see so many people enjoying our plant-based creations, and this is only the beginning!

Oh yeah we did. Our Butternut Squash Wellington! If you're looking for a festive Christmas dinner centrepiece, then… https://t.co/pstAljqpEB

Reply Retweet Favourite
New video: We decided to taste test the most EPIC vegan 🧀 cheese 🧀 in the world. And we survived! Here are the resu… https://t.co/yyGCvENflf

Reply Retweet Favourite
We have some seriously tasty news peeps. Our debut cookbook So Vegan In 5 is now officially global! Not only is it… https://t.co/0ThtNPVUY0

Reply Retweet Favourite
Ready to take your potato game to the next level? Give our epic Vietnamese-Inspired Fries a go! 🍟… https://t.co/BHLFGbsUQj

Reply Retweet Favourite
Walnut Meat Tacos. Quick, delicious and nutritious! Here's our latest video on YouTube if you want to find out how… https://t.co/qDIfiaE3bo